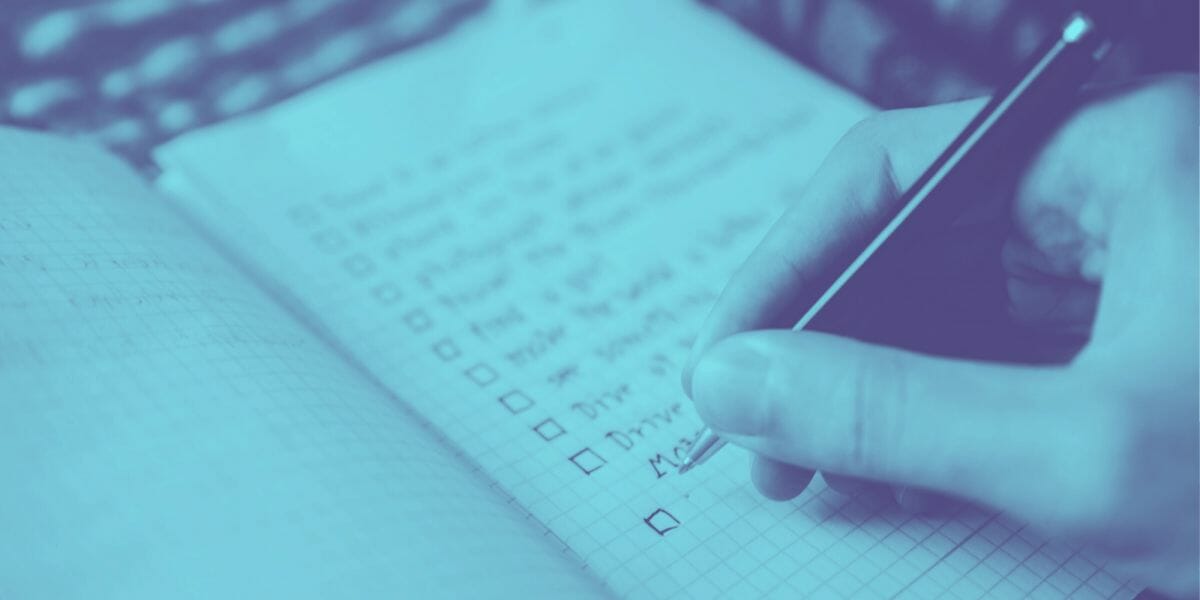 "Our art is never truly finished. We just get to stop at our deadline."

In fact, I would argue it's the most difficult aspect of the creative process. It's just a lot easier to endlessly tweak your music than it is to confidently put the finishing touches on a song and release it out into the world.

I get that. Not only in my own music, but in my student's music as well.

In teaching my masterclass over the past year or so, I realized that a lot of upcoming producers just didn't really have a good sense for when their song was actually finished.

And look, in reality, a song is never done until you say it is, but that can get you in trouble because technically, you could keep tweaking forever.

So as I sat down to work out this issue, I realized that there are certain steps that I take 9 times out 10 when finishing music. That's where this checklist was born. Because that endless tweaking-adjusting-refining-modifying cycle needs to stop right now.

Nothing - and I mean nothing - is more detrimental to your growth as a music producer than getting in the habit of NOT finishing your music.

And if you're not convinced, check out the finishing music video below — it's only 2 minutes long and could potentially revolutionize the way you look at music production forever.

This was one of the first techniques I was taught as a brand new producer and continues to be one of the most valuable things I've ever learned in the music production space.

The concept is simple: listen to your track in stages of 8 bars, and make sure that something happens. The goal is to create forward momentum and interest in the listener's ears - but this can be achieved in MANY forms.

In reality, I could go on forever, right? Once you've created a memorable chord progression and/or melody, there are literally unlimited options as to what you can do to create and maintain interest.

The point is simply this: every 8 bars, something needs to happen. End of story.

Even if you have a good composition, if nothing changes, you run the risk of creating a stagnant, predictable, and boring track. Plus, music production is WAY too hard to let this be your downfall.

The Soloing Technique is awesome. This is something I started doing naturally in the studio over time to try to uncover problems within my mix-downs.

Again, this is fairly straight forward, but the benefits are tremendous. Next time you are working with a full section in your mix (like a drop), go ahead and loop the measure and slowly bring in ONE element at a time.

Start with the kick, and then:

And what you'll find is that at one point or another, your mix will start to suck. And when your mix starts to suck, that's awesome. That's what needs to get addressed. The whole point of this exercise is to uncover exactly what isn't working in your mix.

For example, maybe when you added those 4-to-the-floor claps, all the cymbals got lost, or maybe the kick drum got swallowed. Or the vocal got drowned out.

The point here is that when you bring in one element at a time, you uncover that exact moment when something went wrong in your mix. And if you know when that moment occurs, you can easily jump into your mix, address the problem and move on.

Another amazing strategy to incorporate into your workflow and something I've spoken extensively about in my 8-Week Masterclass, but much like the soloing technique, the muting technique allows you to play everything at once, while slowly muting one element at a time. The goal here is to identify what is unnecessary to the mix.

For example, if you just muted a synth layer in your breakdown, but couldn't here a difference in the overall mix, just cut away that layer.

This technique isn't for suckers - be ruthless about cutting.

If it isn't contributing to your mix and you can't even hear it's contribution, then it's just sucking away headroom. And when it comes to mastering and getting your tracks loud, you will need all that headroom.

So again, be ruthless - and cut those damn layers that you don't actually need.

I'm not a huge proponent on mixing in mono but it's a good idea to check in mono once in a while. Most commercial stereos and club systems are in stereo these days, but if your mix makes it to TV or get's played on some older club system you'll just want to make sure it sounds good.

It's difficult to anticipate how a mix would sound bad in mono in advance, but some things I've uncovered in the past are mostly a result of losing some side information.

Some examples would include when:

Dealing with the issues a mono mix can create is fairly simple.

Sometimes, if you switch your mix into mono, this is a great time to pan certain sounds and elements in order to create space in a mix.

And from there, if the sound pops in mono, you have found a sweet spot, or in other words, a great stereo slot or position for that individual sound.

It's very difficult to only write a few sentences about RMS metering, but the basic premise here is that you can compare your overall average loudness to other commercial tracks.

That's what RMS is (again, without getting too technical). It's the average loudness of your track.

And the fact that there are awesome FREE plugins (like Voxengo Span) out there means we have no excuse not to learn from fully finished, professional sounding tracks.

That said, it's a great idea to check this towards the end of your production as an additional measure of loudness to compliment the most important tool: your ears.

Part of the beauty of using studio monitor speakers is that they have an extremely flat sound - meaning if your track sounds good on monitors, it will most likely sound good everywhere else. Unfortunately, it just isn't THAT simple.

So every time you finish a track, make sure to take a listen on iPhone speakers, car stereos, club systems, iPod docking stations, etc - literally ANYWHERE you can listen will help creating the best possible mix.

And when you listen, take notes!

Keep taking notes and listening on every speaker imaginable, until you are happy with how your track sounds across all systems.

This should be easy, right? Just walk away from your computer for a few minutes every hour so you can avoid putting your ears through a clinical form of torture.

And maybe, just maybe, take this a step further and get outside.

Go for a walk. A run. Go to the beach. Do some yoga. Whatever.

Just do something OTHER than obsess over the tiny details of your mix.

What you might find is that you'll return to your studio with a clear head, and a much more macro-oriented approach that helps you put those necessary finishing touches on your track.

That leads us to the final stage of the 8-Step Finishing Checklist. After taking a significant break from your track - at least 2-3 days - you can return back to your music and almost listen objectively.

It's important to focus on the big picture here and not get too caught up in the little things.

Big picture stuff would include:

THAT is the important stuff.

If all that is clicking and good to go, you've just gotten through the Hyperbits Finishing Checklist and guess what, you're song is done.

Now go and repeat the process (not just finishing, you know - like making another song) over and over again. And if by any chance you took that last fresh commercial listen and didn't like your track at all, start the Finishing Checklist over again.

Ready to incorporate the 8-Step Finishing Checklist into your workflow?