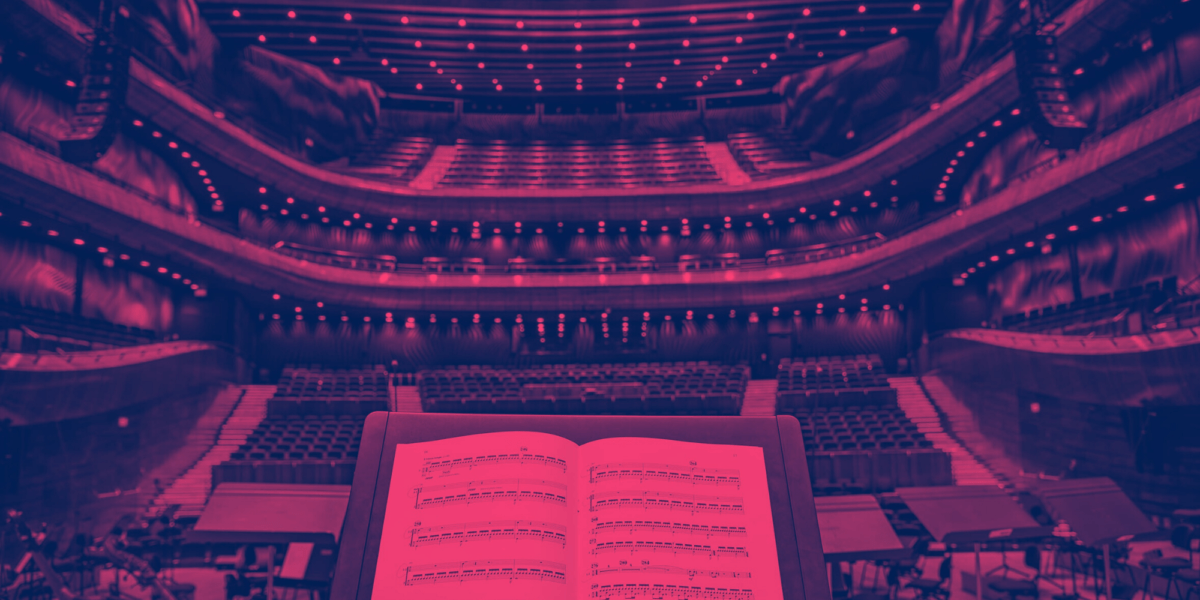 "Music is the one incorporeal entrance into the higher world of knowledge which comprehends mankind but which mankind cannot comprehend."

What do those words conjure to mind?

Maybe it’s a laundry list of words and terminology that doesn’t make much sense to you: adagio, mixolydian, diminished, dominant 7th…

Perhaps you think of sheet music, textbooks, and lectures. Or some complex thesis paper on which mode Beethoven favored in the height of his career.

But the funny (and paradoxical) thing about music theory… is that it shouldn’t be theoretical at all. Music theory does no good for anyone when it simply exists in PhD dissertations or online forums.

Music theory is the language of music. But unlike learning a foreign dialect, simply speaking it isn’t enough. You have to actually use it.

I’m not gonna lie, music theory can be a daunting concept. But like anything in life, the 80/20 principle applies: 80% of the results come from 20% of the material. If you understand the fundamentals, you can get started right away.

The purpose of this article is to show you how to learn music theory. I’ll cover that top 20% at a high level, and link out to resources where you can further your knowledge. Remember — music theory isn’t theoretical. It’s not meant to be filed away in your mind. You win by applying these tools to a composition.

That said, in my honest opinion, the most effective way to learn music theory and composition is to enroll in The Songwriting Matrix. Otherwise, keep reading.

The Five Fundamentals of Music Theory

Let’s get started. I want to outline the foundational concepts in music theory. If some of these are new ideas for you - good! Think of these as the roots that support the trunk of the tree of music. You can go further up into the branches, but these concepts are where it all begins. 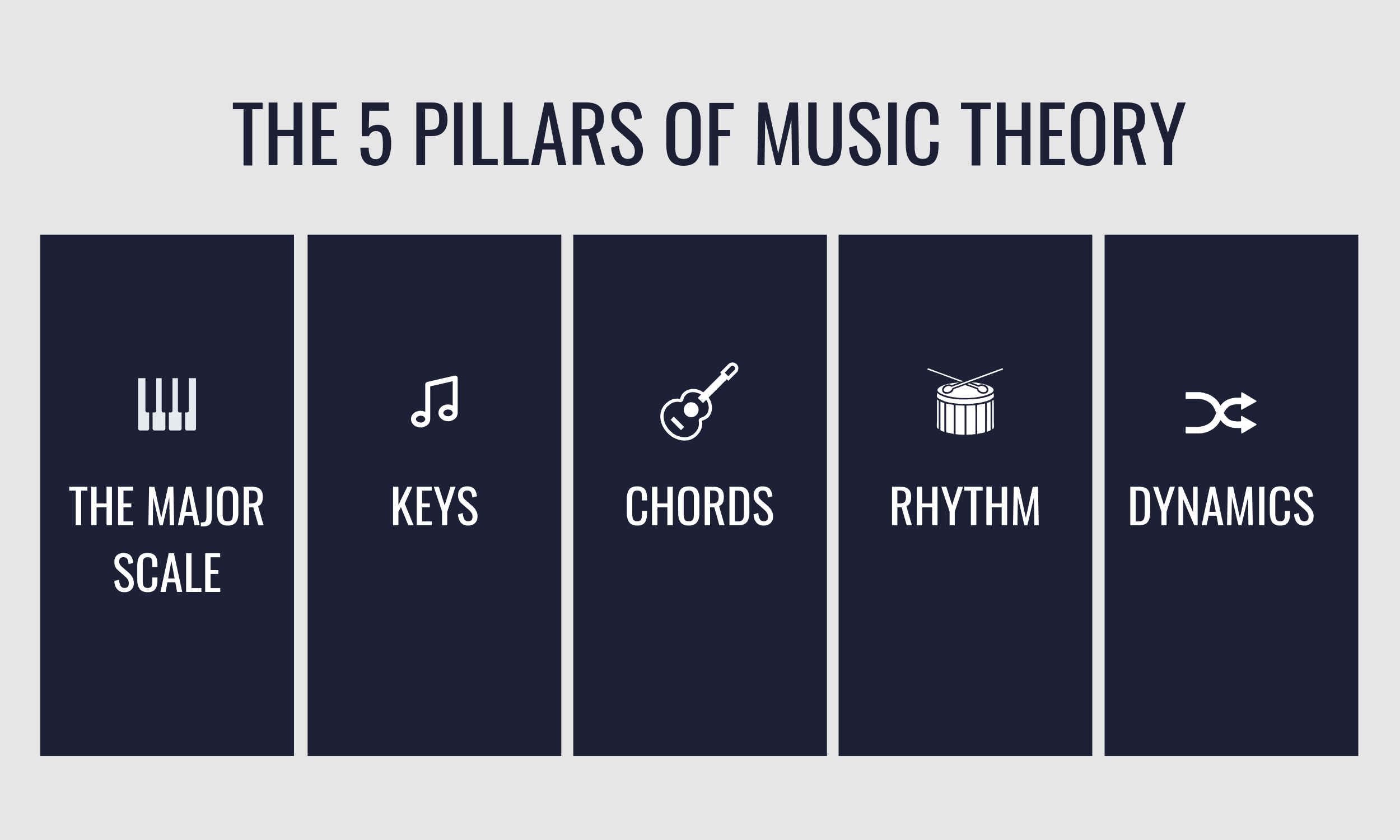 We are working in the Key of C, and we’ve determined the following notes belong in the C Major Scale. We can give each note a name based on the degree of the scale.

C (The root, an octave above)

This is the major scale in the Key of C.

If we were to plot this out on a piano keyboard, we would see that the major scale follows a sequence. Moving up by one note is called a half-step. Moving up by two notes (for instance, the distance between two white keys with a black key in between), is called a whole-step.

Stay with me, because this is a fundamental point. This is perhaps the most important point in the article.

No matter where you start, no matter what key you’re in, the major scale ALWAYS follows the same pattern of whole steps and half steps.

Here is the formula for the major scale:

Start with any note. Let’s use C. To go from C (the root) to the second, move up by a whole step.

Those are the intervals of the major scale, no matter where you start.

The major scale is just the beginning (it’s one of seven modes, called the Ionian mode), but it’s the 20% that will get you 80% of the results. The great news is that once you know the major scale, the rest of the modes follow quite easily, since they can all be seen as variations on the major scale. Again, our friend Ethan Hein has some additional reading on the modes if you’re interested.

Keys (Using the Circle of Fifths) 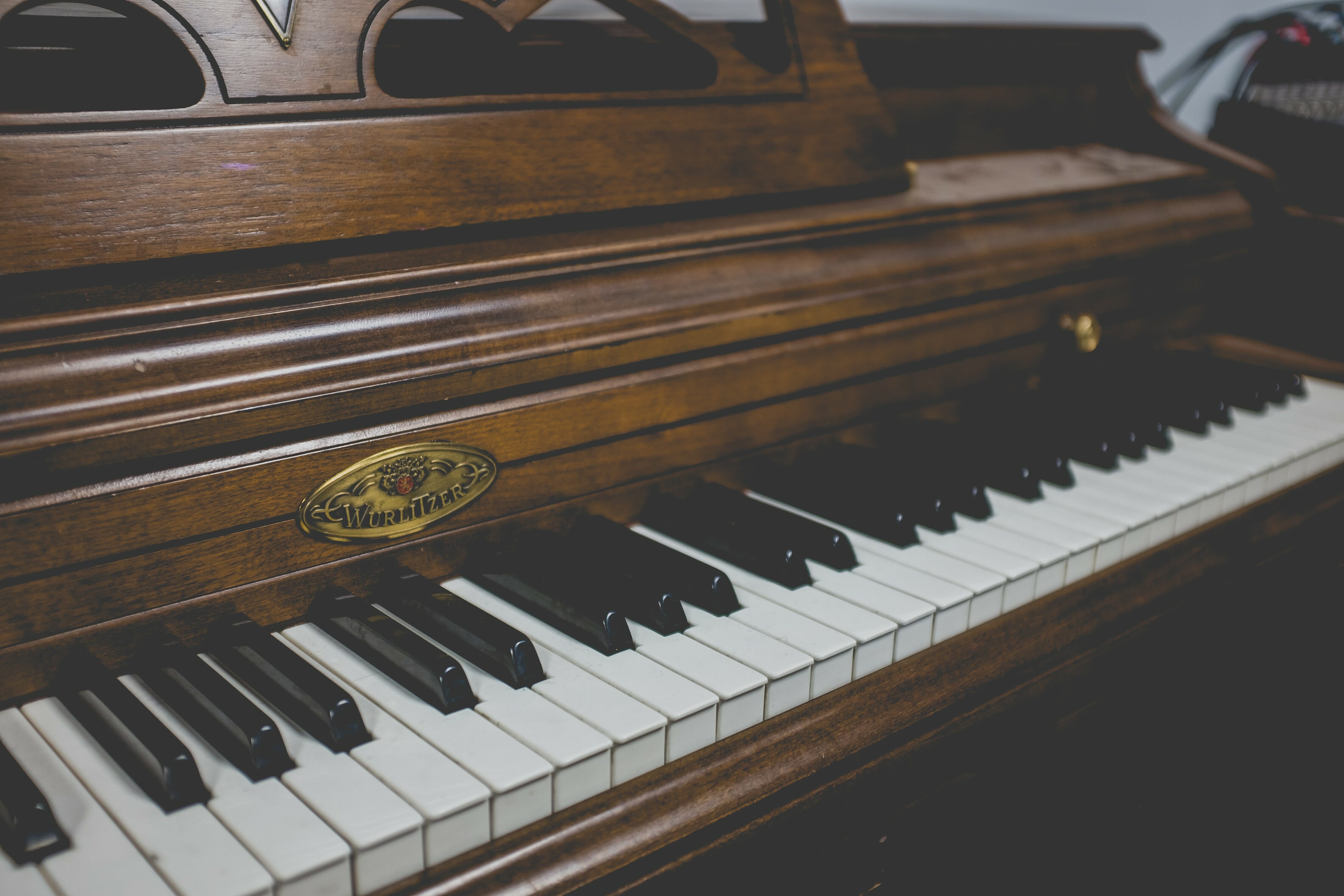 You can choose any of the notes, and decide to make that your home base. In terms of music theory, you are determining the key of your composition. You can write in the key of A, E, G#, Bb…. or any of the other available notes. The important point is that no matter what note you choose, you can use it as the key for your song.

Ethan Hein explains this clearly on his blog, which I’ll cite below: 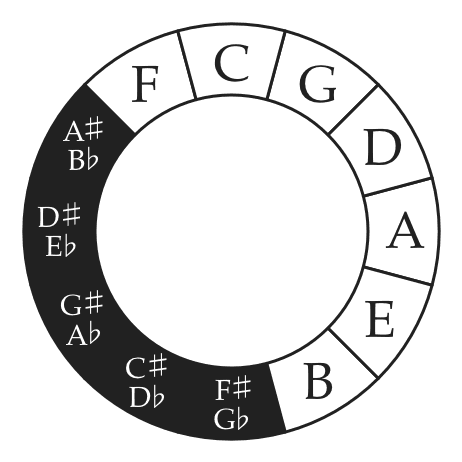 For deeper reading on the circle of fifths, check out Ethan’s post and the wikipedia article.

Alright, so we know how to find which notes belong in any major scale using the circle of fifths. We know that every major scale follows the same formula of intervals.

Now comes the fun part. We are going to take each note of the major scale and build a chord around it. The amazing thing is that this also follows a formula... and it never changes!

When you’re working with the major scale, no matter what key you’re in, the root, fourth and fifth are major chords. The second, third, and sixth are minor chords. The seventh is diminished.

We can use uppercase (Major) and lowercase (minor) roman numerals as shorthand.

Using this information, you can build all the chords for any major key.

There’s a lot more we could cover (and we go deep into music theory in the Masterclass). But the purpose of this article is to teach you how to learn music theory, so I’m including a few resources below that will help you internalize this and see it in practice.

First, check out How to Create Major and Minor Chords. Some more great information from Ethan that goes deep into creating major and minor triads using the notes of the scale.

Next, use Hooktheory to see the Roman Numeral analysis in action. When you see that the most popular chord progression is I V vi IV, what does that mean to you? Connecting chord progressions to songs you’ve heard before is essential, and there’s no better tool than Hooktheory. 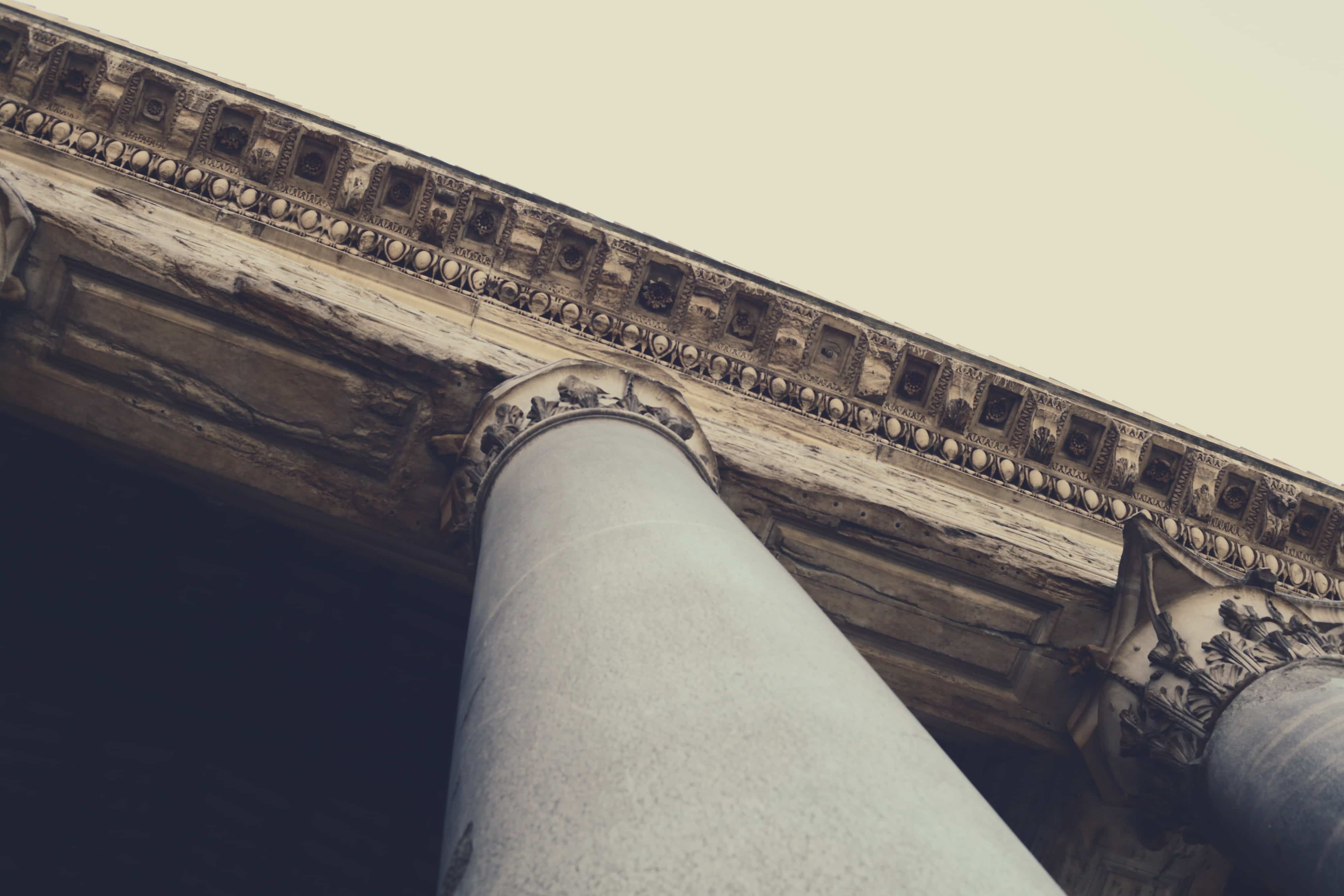 The final pillar of music theory is rhythm. Most music today is written in a 4/4 time signature, meaning that the quarter note gets the beat, and there are 4 quarter notes per bar. Think of Lose Yourself by Eminem. Get that head nod going. That’s 4/4.

Tempo is all about the speed of your song. It’s measured in Beats Per Minute (BPM). In the electronic space, tempo (along with sound design) is one of the defining characteristics of the genre.

There are certain tempo guidelines for genres, but they aren’t set in stone, so it’s better to use a tool like Song BPM or Beats Per Minute Online to check the tempo of a reference track you admire.

Ableton has an online learning tool that goes deeper into tempo and rhythm. But still, after all these years, one of the best ways to learn is by simply absorbing as much music as you can.

Dynamics is the secret to creating memorable and emotional music.

Technically, dynamics refers to the difference between loud and soft. The dynamic range of an acoustic guitar ranges from a lightly brushed string to an all-out strum. The human voice is particularly dynamic, covering everything from a whisper to a blood-curling scream.

Imagine if a singer mumbled the entire track. Or if an Austrian mountain man yodeled at the top of his lungs from the first beat to the final note. These songs wouldn’t be very dynamic, and even if they contained a lot of emotion, they could still feel flat and lifeless.

A dynamic performance covers a range of expression, from up front and intimate to big and powerful. It’s within these changes that we connect emotionally to a song. If you want a part of your track to feel loud, you must include a section that is quieter. Otherwise, it isn’t loud. Loud exists as a difference. Loud exists in the world of dynamics.

You won’t see dynamics covered in many articles on music theory, but it’s a Skeleton Key for  creating captivating music. Here’s an article that takes it even deeper: Why Dynamics in Music is the Key to Emotional Productions.

Take Your Theory to the Next Level

There’s so much to cover in the world of music theory. I’ve made a focus to keep this article honed in on the most important points. Get acquainted with the major scale, it’s your best friend in the world of composition.

Once you’ve got a grasp on the major scale, you’ll want to investigate how to use minor scales - and the easiest way to do this is through a concept called relative minors. The sixth of any major scale is called the relative minor.

For example, A minor is the sixth in the Key of C Major. That means that the key of A minor uses all the same chords and notes as C major. So when you’re playing in C, you’re also playing in A minor! It just depends on what you want to emphasize as the “home base.”

Next you’ll want to start using dominant chords. Dominant chords are useful because they signal a direction - they are full of anticipation and suspense. If you’re already familiar with dominant chords, Ethan has a post on secondary dominants. This is one of my favorite theory lessons within the Masterclass.

Take the tools outlined in this article, and explore them as deeply as you can. Use Hooktheory to get a feel for how chords play out in practice. And then, if you start investigating relative minors, modes, and dominant chords, you will be ahead of the pack.

Remember to use these tools in your compositions. Experiment with dynamics. Choose your tempo and time signature consciously. Pick a key you’ve never written in, and use the circle of fifths to build the major scale around that key. The more you flex this muscle, the stronger your sense of intuition and improvisation will be.

How do you like to learn music theory? Are there any resources or lessons you’ve used that have helped you tremendously? Feel free to share the knowledge below - there’s always more to learn!