A Simple Man’s Guide to Basic Music Theory for Producers


“Music is a higher revelation than all wisdom and philosophy. Music is the electrical soil in which the spirit lives, thinks and invents.”

Music theory is something many electronic music producers find challenging – and hey, I get it – even with a basic understanding of music theory, I get confused all the time. That said, music theory is a skill set that is very learnable if you simply commit to it (especially if you’re creating western music, which you most likely are).

The reality here is that a music producer who has some semblance of music theory training will essentially be a more effective music producer. That producer has more weapons to work with in his arsenal. It doesn’t matter if it’s for EDM (Electronic Dance Music) or for any other genre, producers who have learned these skills are disciplined. They do not doubt their ability to come up with new material because they don’t view it as contingent on chance. It’s something they are trained to deal with. Above all, that is the main benefit of learning the intricacies of music theory.

So what if you aren’t there quite yet? How do you catch up? How can you write memorable, meaningful and beautiful compositions?

The answers are in this article.

Any online music theory course will present the same exact information in their course as what is in this article, albeit with some additional examples and exercises to work through.

And with a little additional digging, some practice, some fundamental music theory, and a few modern-day music theory hacks, you’ll be well on your way to learning the necessities of music theory for computer musicians.

Click here to jump straight to an epic music theory hack
at the bottom of this article. Otherwise, keep reading!

Let’s start with the basics and talk about music theory for piano. Piano is the most important instrument to grasp because every DAW uses a piano roll for your midi and composition editing. This is applicable beyond piano, but again, this is the most common instrument used to learn the basics of music theory.

Major scales carry a more light, happy emotional feeling, with most of the emphasis in the key placed on major chords. 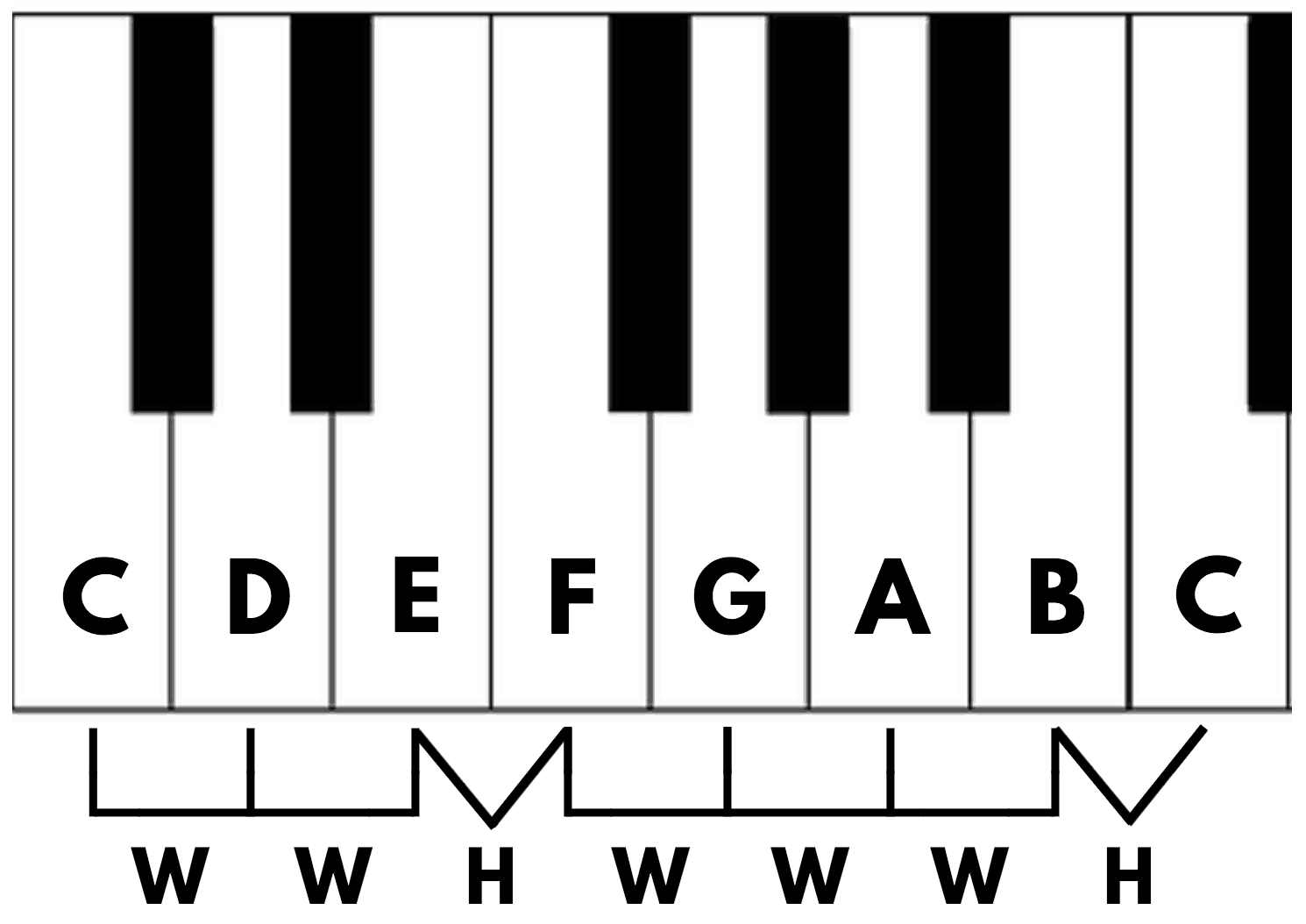 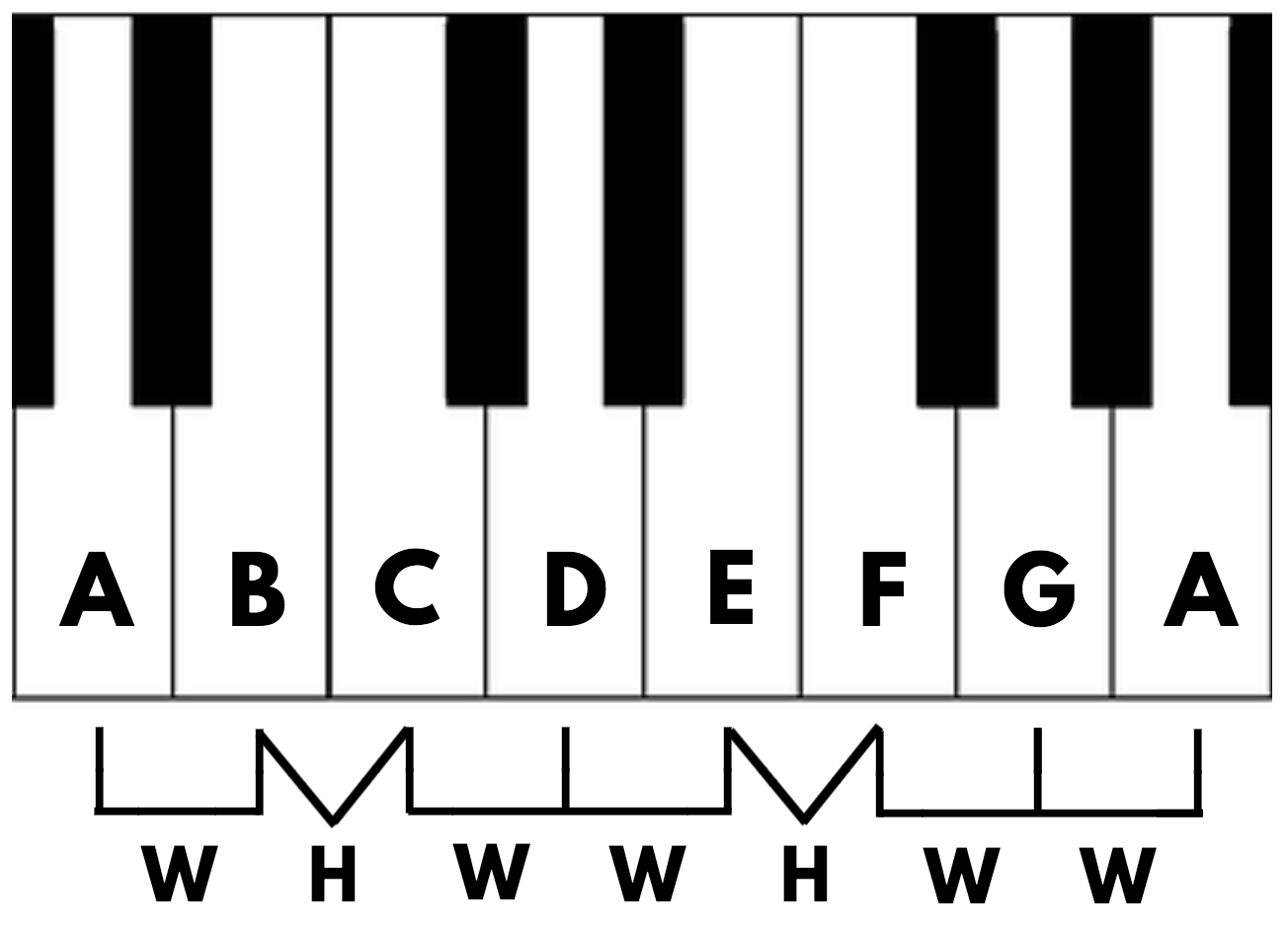 Key of A minor

An inversion is created by transposing a note within a chord to a different octave. For example, C major (C-E-G) can be inverted so the lowest note in the chord is E, and the highest is C (just up one octave) – E-G-C

7ths and 9ths indicate the addition of the 7th or 9th note above the root note of the chord into the chord itself. For example, Cmaj7 means a C major chord plus the note that is 7 intervals above the rote note (C) of the chord (in this case, the note B). Cmaj7 = C-E-G-B

9ths follow the same rule, but with the addition of the note 9 intervals above the root note of the chord. Different types of ninth chords can also include the 7th, and other notes.

Now that you know how to build out major and minor chords, as well as create inversions, 7ths and 9ths, a chord progression is simply how you jump from one chord to another, or a succession of musical chords.

What’s interesting, however, is that you cannot copyright a chord progression – so feel free to use existing songs as a form of inspiration or to simply help spark your creativity when writing. For now, let’s get a basic grasp on using chord progressions in your music.

At the end of the day, the important thing to understand about chord progressions is that (at least in Western music) they are relatively straight forward. You don’t need to reinvent the wheel every time you create a chord progression (especially if you are a beginner)

Obviously there is an absurd amount of chord progressions not listed here, but if you are unfamiliar with building out chord progressions, start by re-creating this list so you can familiarize your ears and experiment from there.

For more on chord progressions, jump to the Unison MIDI Pack at the bottom of this article.

A key change means the usage of a new key for a certain part of a song. This is relatively rare in pop music, but if done correctly can create a strong emotional shift in a composition. Key changes are more common in classical music.

So, to figure out the secondary dominant of any chord within your scale you can ask yourself what would be the V chord of the scale if the chord I’m choosing were in fact the root.

These are really useful because we know that the V chord has a very strong pull to the I chord. The V7 chord has an even stronger pull to the I. So using the correct secondary dominant chord as a transitionary chord to any chord within your key can have a very dramatic and musical effect.

There are tons of awesome resources online to help you come up with chord progressions, analyze songs you like, and essentially “hack” music composition without a music theory background. But, at the end of the day, there is no substitute for a strong understanding of music theory, and putting in the effort to improve your music theory knowledge will only help you write more compelling compositions.

As someone who took a lot of pride in originally writing all of their own chord progressions from scratch, I couldn’t believe that no one cared, noticed, or tried to arrest me when I first used a chord progression I built using an online tool like Hookpad.

Letting go of this idea that I had to do everything from scratch opened up my creativity, saved me time, and allowed me to experiment with progressions outside my comfort zone. If anything, it made me better at music theory.

This is exactly why, when I learned that one of my former Masterclass students founded a sample pack company called Unison, and had put out an amazing MIDI Pack, I was pretty damn intrigued.

Once I got my hands on it, I was blown away – I could bypass other midi packs and online services like Hookpad all together, because the pack contains essentially every chord you’d ever want to use. Complete with triads, inversions, extended chords, borrowed chords or even full-on progressions. It’s literally the perfect midi-pack, something I wish I had created for myself years ago to make the composition process significantly easier.

See for yourself below, I recorded a quick, genuine review of the Unison MIDI Pack, and even built out a chord progression and the foundation of a song in under a minute.

Normally, this midi pack sells for $67 – but since you are a Hyperbits reader (or subscriber, student, etc.) you can get 60% off of this pack.

That means that for $27, you can make writing chord progressions an absolute breeze. Whether you consider yourself a beginner at music theory or more advanced at music theory, this pack will dramatically improve your composition workflow, and make things a lot easier for yourself.

And again, as someone who is pretty good at music theory, this pack has actually helped me hone my craft.

This pack isn’t a complete catch up solution if you are struggling with music theory and chord progressions, but it’s pretty damn close.

HYPERBITS DISCOUNT: Get the Unison Midi Pack
for only $27 (normally $67)

I’d make the argument that for only $27, this pack is worth more than any music theory course (something like music theory for dummies) you’ll find yourself working through. In the end, I’d do both – I’d get this pack and brush up on my music theory skills as well, because the skillset of music theory will only help in the end, and would compliment your creative process perfectly.

Enjoy the pack and enjoy the discount! What about you, what do you think? Do you need to learn music theory to produce electronic music?